Who Picked Your Outfit?

I am so fortunate to have a cousin who has a daughter that is about 8 months older than the girl. We get the most amazing hand-me-downs. From ages newborn-24 months, I didn't have to buy a single piece of clothing. My cousin is also pretty similar in taste as to the clothes she picks out for her daughter - nothing too frilly, mostly Old Navy, Target, and Kohl's. It's definitely a win-win situation (mostly for me).

The family has not got together recently, and therefore, the size 3T clothes that we need are still at my cousin's house. So the girl and I had to actually go shopping.

Don't get me wrong - the girl does not want for anything. But, we tend to buy clearance and on sale because she outgrows it so fast.

We arrived at Kohl's with our coupon and reward dollars. As we headed toward the toddler department, we were bombarded with apparel emblazoned with Frozen, Sophia the First, Doc McStuffins, Minnie Mouse, and an assortment of other pink/purple/aqua apparel that I couldn't identify.

I do consider myself lucky that the girl rarely asks for such things. We do own an Elsa shirt and a pair of Frozen slippers, but most of her attire is pretty neutral.

As we walked around, she grabbed a onesie off of the display and told me she wanted it. It was red and had a fire truck on it. I tried to explain that she couldn't have that one because it was meant for babies (3 months). She was insistent that she wanted that particular design.

I managed to get her to return the onesie with the promise that we would look at the bigger kid clothes and see if they had it in her size. We headed to the toddler section. As we purused the shelves, we found a cement mixer (!), a fire truck (!), and a dump truck (!). She was ecstatic. She loves construction equipment and often makes us stop to watch the big trucks whenever there is construction going on.
I held out the cement mixer and the dump truck and told her she had to choose between those two because we were only buying two shirts total. As I held out the shirts, the employee folding clothes next to us said, "Those are boys' shirts".

I felt my heart drop into my stomach as I tried to gauge the girl's reaction to what the employee had just said. She didn't seem to hear as she was trying to make an extremely difficult decision. She chose her shirt (the dump truck), I scooped her up and we walked away from the area as fast as I could go.
I couldn't believe that we are still at this point.
Boys' clothes
Girls' clothes
Boys' toys
Girls' toys
Boys' jobs
Girls' jobs

The girl is only 3, but I hope that we are empowering her enough to know that there is no such thing as "girls' clothes or 'boys' clothes". Half of her wardrobe comes from the boys' section because that is what she is comfortable in. If she chose tomorrow to want to wear a princess dress, I'd buy it. Reluctantanly, I admit, mostly because she will probably trip and fall down.

I thought we were past the part where we were holding TODDLERS to gender stereotypes.


Here are some books we will be reading at our house in the near future. 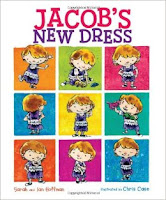 Morris Micklewhite and the Tangerine Dress by Christine Baldacchino