The girl and I were approached today in the parking lot by a panhandler. He sort of startled me because I was trying to strap the girl into her stroller and he came up on my blind side. Fortunately, he stayed a good distance away, otherwise I would have probably freaked out at the thought of someone approaching me while my back was turned while my kid was with me.
Anyway, he asked for money. He had some story about being homeless and living in his car. He said he was from a town about 40 minutes away and they had a doctor appointment out here and now they needed money to buy gas to get back. I have to admit, my mind shut down as he told his story about five seconds into it. But not for the reasons that you would think.
First, I am 99% sure that the money I gave him was for drugs. There is very little doubt in my mind that the young man took the money I gave him and promptly drove to wherever you buy drugs from and bought a hit/a score/a whatever. I am fairly certain of this because you don't ask random strangers for money unless you are in bad shape. Bill Hicks had a bit about someone telling him not to give money to panhandlers because it was probably for drugs. He replied that "You've probably never been a drug addict. Drugs are pretty important to a drug addict." This bit was running through my head the whole time the guy was talking. I'd like to think that if I hadn't given him money than he would have realized what a bad path he was down and turned his life around. However, this is not a movie. Life doesn't really happen like that. I hope that he gets help. I hope that he does turn his life around. But it will not be because I did/did not give him a few bucks in the parking lot of Whole Foods.
Second, this guy was young. I am a terrible judge of age. But he couldn't have been more than 23 at the most. In his story, he had some part about taking care of his mom and then she lost her house. That was when it hit me. This guy, no matter how old, was someone's kid. This could be MY kid. I can't control her life choices. I hope that I can help her to make better choices than what has led this young man to be asking for money in a parking lot, but I can't control it. I can't be certain that this outcome won't be her. And if by some unknown chance it is, I hope that someone is kind enough to help her out. So, as that is running through my head, I made my decision to give this guy some money.
I can already hear the conversation happening with the girl, once she is old enough to talk.
"Mommy, do you know that man?"
"No, honey. I don't."
"Then why did you give him money?"
"Because honey. Our job in this world is to make people's day a little better. Sometimes that means being a little extra kind to people that we normally don't want to be kind to. Sometimes that means we help those who can't help themselves. And we hope that by helping them it makes them a little happier and a little stronger of a person."

A Chance To Shine by Steve Seskin
A boy is changed after interacting with a man down on his luck. 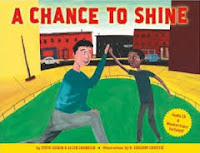 How To Steal A Dog by Barbara O'Connor
Georgina is looking for a way to help her family find a home since they are living in their car.