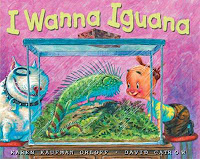 buy this book
Oops! I don't know how I missed a week! Time was flying by and I was not keeping up. Well, this book I Wanna Iguana by Karen Kaufman Orloff makes up for lost time. It is a series of notes written between a boy who wants to get an iguana and his mother. There is so much humor in this book and the illustrations are fabulous. The boy presents his many arguments and tries to convince his mother that he should be allowed to get the iguana. The mother's reasons are hilarious and exactly what a mother would say.


Classroom Ideas
1. This is a great text to launch a letter writing unit. These are quick notes back and forth but would be great for comparing the different types of letter writing. Each note also has a interesting closing, rather than the standard 'love' or 'sincerely'. These could be great for showing other ways to use the closing of a letter.
2. This is a wonderful mentor text for persuasive writing. It can be taken to many different levels. If you are looking for a simple idea, just the idea of presenting reasons why something should happen is in the text. When using this in a fifth grade room, we had the students look for 'tactics' that the boy used to convince his mother. The kids found many ways including 'sweet talking', 'highlighting the positives', and 'guilt'.
Posted by jen at 4:52 PM

New comments are not allowed.